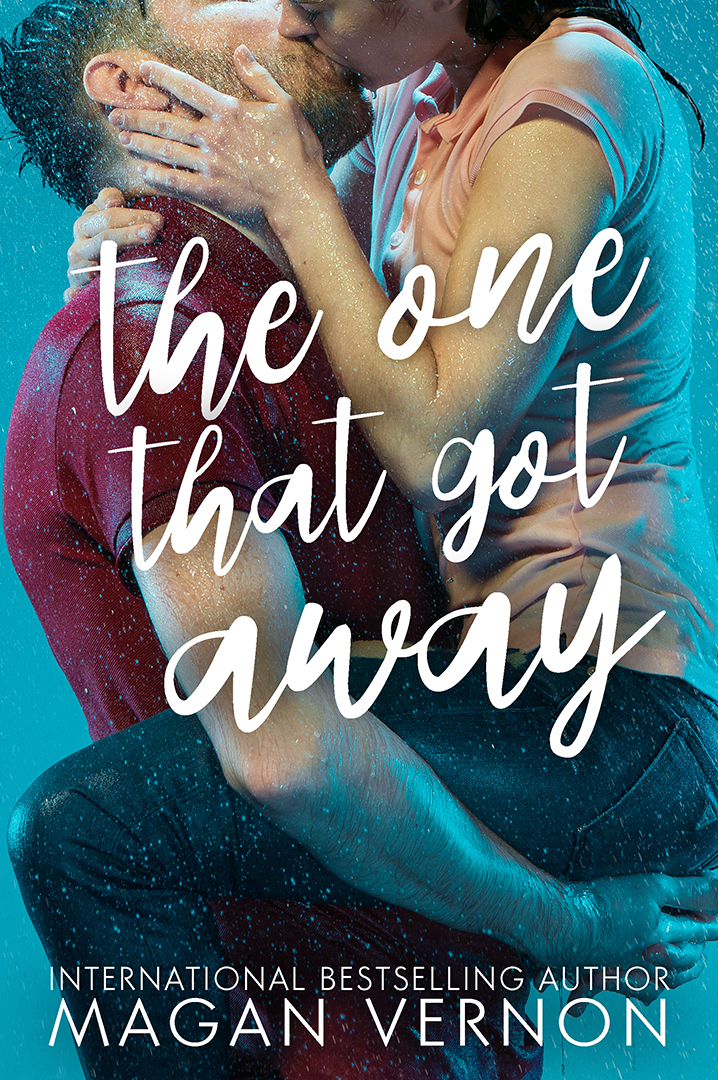 I hadn’t had sex in I don’t remember how long, which was even more awkward because I had a boyfriend.

Okay, maybe boyfriend wasn’t the right term. Joey Bianchi was the only other person in my group of friends who didn’t leave Friendship for college, so for the past three years, we would hang out. Sometimes, we’d go to the movies or get pizza, and sometimes, we’d both get really drunk and have sex. But it had been a while since that last part had happened. Like a really long while.

Maybe it was because I put on some extra weight working at the Forever Sweet Bakery, but even that was hard to tell; since I was so tall, everything sat on my hips anyway. I worked part-time at the bakery and for a studio that did school portraits.

But Joey had texted me while I was in the middle of a newborn session to say he wanted to meet up tonight.

“Is there something on your phone? Are you looking at those Pinterest pictures I sent you?” Julie Quinn asked, looking over my shoulder.

I couldn’t stand the know-it-all in high school any more than I could stand her now. I only agreed to this session because of her sister, Christy, was one of my best friends, and I needed the money so I wouldn’t be the last twenty-one-year-old living at her mom’s place.

“Yes, Julie. I remember them. I was just checking the time,” I said through gritted teeth, trying to act pleasant.

Putting a one-week-old baby in a basket in a pond behind Julie’s parents’ ranch wasn’t exactly what I would have wanted for my newborn baby, but she was paying me, which was more than I could say for some of the families who wanted me to do senior portraits in trade for farm fresh eggs.

“Think maybe you could climb the willow? Maybe an aerial shot will make Ella’s neck jowls less prominent,” Julie said over my shoulder as I looked in the Nikon instead of focusing on Julie’s flared nostrils.

“I can put her on the dock and take the photos with the pond in the background. If you want, I can even photoshop the dock out later, so she looks like she’s floating in the water.”

Julie squeezed my shoulders. “You’re so smart. Let’s get Ella.”

After a million pictures of Ella, I finally packed up to leave Q Ranch and take FM6 to downtown Friendship. And by downtown, I meant basically two and a half blocks of older one-story buildings remodeled into little boutiques, a handful of restaurants, and the Forever Sweet bakery where I worked. Next door was Conti’s, the local Italian restaurant where I was meeting Joey for dinner, and then I hope going back to his place. And by his place, I meant the guesthouse on his parents’ property where they let him sleep. You know, since neither one of us had our own place.

Maybe that was why he wanted to have dinner tonight? Maybe he’d finally put away enough money to get a house, and he wanted me to move in with him? Not that I was sure I wanted to move in with him, but at least I wouldn’t be living with my mom. My mom and her new boyfriend—who wore way too thin sweatpants that left nothing to the imagination.

I fluffed my half-curly, half-really-could-use-some-tamer hair one last time before I opened the front door of Conti’s and took in the smell of fresh garlic and tomato sauce.

“Abbey! My favorite little baker, did you bring me some tiramisu?” Mr. Conti said, coming out from behind the bar. I was tall for a girl at six-foot, and when Mr. Conti hugged me, his bald head came almost right to my chest with his graying mustache tickling my collarbone.

“Not today, Mr. Conti. I’m just meeting Joey for dinner,” I said as he released me.

“Bello, you aren’t asking the bella to sneak you sweets again, are you?” Mrs. Conti, who was even shorter than the mister, yet she could scare the hell out of anyone with her thick-accented voice, short black hair, and big floral dresses.

“No, no, Mama. I was just saying hi to our favorite baker,” Mr. Conti said, turning to smile at his wife whose face never changed from its permanent scowl.

Mrs. Conti looked in my direction and nodded. “Joey’s back there in a corner booth. The boy already went through half a pitcher of beer and a basket of breadsticks. I haven’t seen a man that nervous since Jay was going to propose to our Lia.”

I felt my heart thud in my chest. Proposal? I didn’t think there was any way in hell that’s where Joey’s mind was. All I was hoping for was maybe some mildly satisfying missionary and Netflix, not a ring tonight.

“Thanks, Mrs. Conti. I’ll go find him,” I said, forcing a smile before I walked toward the back of the restaurant.

Just like Mrs. Conti said, Joey was sitting in one of the red plastic booths. He didn’t look like a guy ready to propose with his Team Realtree hat and plaid button-down over his broad frame. I convinced myself that after a few glasses of Riesling and if I squinted really hard, he looked like a chubby Joseph Gordon-Levitt.

Joey looked up from his phone, that he was permanently attached to, and raised his eyebrows. “Hey, are you okay? You look like you’re really constipated.”

I stopped smiling and sat down. “Yeah. Totally fine. No constipation here.”

“Oh. Good. That would be really awkward,” he said, looking back at his phone.

The little pixie of a waitress practically floated to our table. Dana Conti was married to Nicky Conti, Mr. and Mrs. Conti’s oldest son. While Nicky was large and in charge with a deep voice like he smoked a pack a day, Dana was the opposite at barely five-foot and one-hundred pounds—even after having a baby—and had a tiny voice that reminded me of one of the munchkins from Wizard of Oz.

“Hey y’all. Oh, my God! Abbey, thank God you’re here. I wanted to make sure we’re still all set for next Saturday and Sofie’s shower. Did you get the pictures I emailed you? I want it to look just like that one on that pretentious mommy blogger’s page. I’ll show her who can throw an ‘Under the Sea’ baby shower!” Dana put her fist in the air.

“Um, yeah. I think Carla has that at the bakery,” I said, trying to smile. I didn’t want to look constipated, so I tried just smiling with my eyes like the chorus teacher used to tell us to do.

“Are you okay, Abbey? You’re looking at me like you want to cry. Is this a jealousy thing? Is this because this shower is for Sofie and she’s like your stepsister, sort of, and she’s with that that really tall swimmer? Seriously, I think that dude can just reach across the pool and hit the other end,” Dana babbled.

I blinked once then twice, shaking my head. “No. I’m not going to cry. Just … just, yeah. Thanks, Dana. And I’ll order a glass of Riesling and a caprese salad.”

Dana raised an eyebrow as she took down my order on her little notepad. “No fettuccini alfredo tonight?”

“No. No. You know I had a big run earlier. Been really trying to work out and eat right. You know, getting slim and trim here,” I said, forcing a laugh that just made me sound like I really was constipated.

“Okay then …” Dana said, her words dragging as she finished scribbling on her notepad and turned, heading toward the kitchen.

“So now that that awkwardness is over. It’s been a while. How have you been? Business going well? I mean I know it’s slow season for landscaping and all …” Whenever I got nervous, I found myself babbling. Why was I nervous? I saw Joey not that long ago, and it wasn’t like the guy gave me butterflies or anything. He was just the guy beside me. The guy who said I looked constipated. The guy who Mr. and Mrs. Conti said looked like he was about to propose.

Joey sighed. “This isn’t working for me, Abs.”

I raised an eyebrow, thinking maybe he would put down his phone and explain. “Come again?”

Joey didn’t say anything for what felt like forever as he continued to tap on his phone. Finally, he glanced up then did a double take. “Oh. You’re still here. Um. Yeah. This is awkward.”

“Awkward? This is beyond messed up. This isn’t working for you? What isn’t working?” I asked, trying not to raise my voice, but I was openly gawking at the guy.

He sighed and finally set his phone down, folding his hands together on the table. “Look, Abbey. We’ve been having some fun, but it’s not working for me anymore. Us, whatever we’re doing.”

“But we’ve just been hanging out. Hanging out and … bow chicka wow wow.” I sang the last part.

He frowned. “Don’t ever do that again.”

Before I could respond with something snappy, Dana came to the table with my wine and salad. “Here you go. And if this isn’t enough, you know we can whip that fettuccini up in no time!”

“Thanks,” I muttered, not even trying to smile with my eyes or mouth.

Dana took the hint and went back to the kitchen, leaving Joey and me to finish our awkward conversation.

I gulped down half my glass of wine before setting it down and let out a deep breath. “Can I ask why?”

Joey smirked, picking up his phone. “You don’t want to know.”

“What, did you find someone else? Another girl on the side who isn’t almost a foot taller than you are?” Wow, the alcohol was hitting hard and early. If I was already going there, I figured I could take another few big gulps.

“I mean this chick who I was sort of also hanging out with told me her period was late, so if I’m gonna be a dad, you know, I figure I can’t half-ass it and be hanging out with other chicks.”

He said it so casually as if he was asking me to pass the parmesan. I swore I must not have heard him right.

Joey smirked, letting out a half laugh. “You sound like a grandma saying that.”

“Better than a guy who just told me he knocked up another girl,” I muttered, finishing the rest of my glass before I went for Joey’s pitcher of beer, drinking straight from it.

I set the almost empty pitcher down, letting out a huge burp. “Classy as a chick who just found out her fuck buddy may have gotten another chick pregnant.”

Joey shook his head and put his phone in his back pocket, standing up. “You know what, Abs. I don’t need this abuse. It’s over. Imma move on, and you can sit here and have your drinks.”

I held up the pitcher. “Salud, Joey.”

He shook his head again and headed toward the door while Dana pushed her way past him. “Is everything okay? Did I just witness a breakup? Do you need more wine? Or more beer?”

“More all of it,” I muttered, pushing my glass and the pitcher toward her. “And some alfredo while you’re at it.”

Dana offered a small smile and nodded. “Coming right up.”

Like what you read? You can now purchase The One That Got Away today!

« Why me and Supergirl are alike
First Chapter of The Only Chance! »