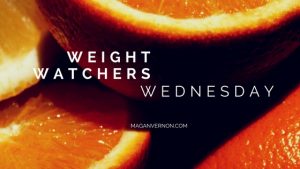 This is my first time posting about this and after my before and after photo yesterday, I thought maybe I should go into a little bit more of an explanation. 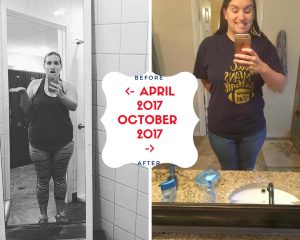 I’m not going to start at the very beginning, but let’s go with April 2008 when I first joined Weight Watchers while in college. I lost fifty pounds rather quickly and really became obsessed with my weight. Of course that changed when I got married and then nine months after the honeymoon my little girl was born.

Add to that a second child, two cross country moves, big book deadlines, etc and I’d gained everything I lost plus another fifty pounds.

I’d tried a bunch of different diets and then in July of 2016, I found out my insurance covered a nutritionist, so I thought I’d try that. She told me about My Plate and had me track my calories on the My Fitness Pal app, and see her once a month. The scale literally did not budge and I would get so depressed I’d binge. Six months into it and about an entire four pounds lost, she suggested since I have polycistic ovary syndrome to try something similar to Keto.

Still didn’t lose weight and then I went to my doctor in April of 2017 who took blood work.

Mind you, I’ve always been a curvy girl, but I’ve been healthy. I’ve always had low pressure, blood sugar, cholesterol. Imagine my surprise when the doctor showed me my numbers and said they were all too high. I cried as my doctor and I discussed me needing to lose weight and put me on Belviq. I went back to my nutritionist, cried, and she gave me some tough love, telling me I needed to add in actual work outs.

So I started at a gym doing zumba and working out 3-5 a week along with Belviq. Weight loss still wasn’t happening so my next month appointment my doctor suggested phetermine.

I had awful side affects and tried working out, but could barely make it through a zumba class with them.

My husband got me a fitbit for my birthday and after another weigh in at the doctor that same day, she said “you’re doing okay, it’s just a slow process.” I cried, yet again, and asked about weight loss surgery. The doctor frowned and told me that I wasn’t a candidate since I’m anemic.

After drowning my sorrows in birthday dinner and Sonic, I thought I could still do it. I had diet pills and a fit bit, I was going to lose weight, right?

No. From August 1st-10th I actually gained weight and was so depressed, I bought a large can of Peach-A-Rita on the way home from a large mexican dinner. While the family and I watched lego batman, I drank that entire Peach-A-Rita and then ended up, drunk, logging onto my computer and joining Weight Watchers.

Yes, I lost weight with them in 2007, but I also tried joining again after my first child was born, second child, when we moved to Charlotte, etc. I ended up dropping out every time after a few weeks and not seeing results.

What was different this time?

This time, I really had no choice. It was this or by October I’d have to go on medication for high cholesterol, blood sugar, etc. My dad had a heart attack at 45 so this scared the crap out of me.

Weight Watchers had also changed a hell of a lot over the years. They now track using five different things to create food points (calories, fat, carbs, protein, sugar) and I can track these all on my phone, including tons of recipes.

My first meeting, I sat down with the leader and she told me “Look up your favorite drink at Starbucks”. When I first did WW, and even recently, I would get a skinny caramel macchiato. I looked up the tall size which used to be four points and my eyes widened when I saw it was now seven points!

How? 150 calories is seven points?

The leader grabbed this container of a drink called “premier protein” to compare. Both 150 calories.

I’d been looking at the calories for so long then trying to count a percentage of macros and failing. Weight Watchers broke it down into a really simple form for me.

I asked about working out. The leader told me we don’t even worry about that until week 4. Back in the day it used to be if you worked out, you would get more points to eat that day. Not the case anymore. Now you just have to get so many fit points a week from workouts, which equals me getting in my fitbit steps a day.

I’m not saying this to brag, I just want to share my journey and I’m going to continue to blog and update you all on this with info, including a new recipe to try.

Any questions or comments? Drop them below!